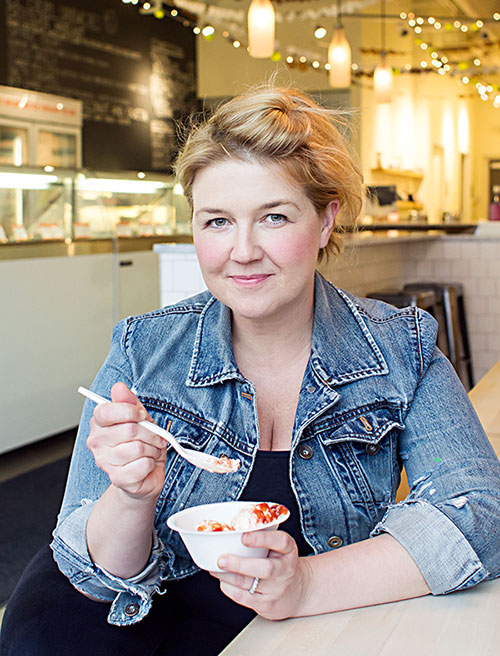 Jeni Britton Bauer has honed her ice cream-making skills for nearly two decades and is the author of The New York Times best selling Jeni’s Splendid Ice Creams at Home. In its 8th printing, the cookbook dubbed the “homemade-ice cream-making Bible” by The Wall Street Journal earned Jeni a James Beard Award, America’s most coveted honor for those writing about food and the culinary arts.

Jeni opened Jeni’s Splendid Ice Creams in 2002 in Columbus, Ohio’s North Market, and in late 2013 will be operating 15 shops from Chicago to Atlanta. Pints and ice cream sandwiches are also available at more than 900 American groceries, as well as through Jeni’s home-shipping business. Jeni and her team are responsible for the entire customer experience, from creating the ice cream flavors and descriptions of them to packaging art and design, store environments, and service. Jeni’s ice creams have been praised by Time (“America’s best”), Cooking Light (“deadly delicious”), and Saveur (“revolutionary”), while Food & Wine stated, “No one makes ice cream like Jeni Britton Bauer.”

Jeni discovered her passion for dessert in Columbus while working at La Chatelaine and studying art at The Ohio State University. In the French bakery’s kitchen, Jeni was taken by the staff’s dedication to the art and craft of making pastries from scratch, as much as she was the attention paid to all technical details. As Jeni began to make desserts and ice creams in her own home kitchen, she realized that eating ice cream is a layered sensory experience, much like viewing a painting or reading a poem. In 1996, Jeni quit her studies in fine arts and art history at OSU to open Scream Ice Cream in Columbus’ historic North Market. Today, Jeni refers to Scream as her “practice business.” During four years of experimenting with ingredients and talking with customers, she learned from countless mistakes that would lay the foundation for her next business: Jeni’s Splendid Ice Creams.

Today, Jeni and her hands-on crew make every batch of ice cream, sorbet, and frozen yogurt in their kitchens in Columbus. To build everything from the ground up, they use cream from Ohio cows, Ohio honey, whole fruits, vegetables, and herbs from nearby farms, as well as carefully sourced ingredients from around the world, including rare, fair-trade vanilla (Uganda’s Ndali Estate) and bean-to-bar chocolate (Missouri’s Askinosie Chocolate). Signature Flavors Salty Caramel, Queen City Cayenne, and Whiskey & Pecans anchor a menu that also includes limited-edition, quarterly flavor collections inspired by the seasons, pop culture, culinary history, and world trends—flavors such as Absinthe + Meringues, Yazoo Sue With Rosemary Bar Nuts, and Lime Cardamom Frozen Yogurt.

When Jeni isn’t developing new flavors, or art directing new campaigns, she devotes time to Local Matters (the fresh-food-for-all non-profit she co-founded in Columbus), serves on the boards of the Wexner Center for the Arts and Columbus College of Art & Design, and gets into trouble with her husband and two children at their home in Columbus.