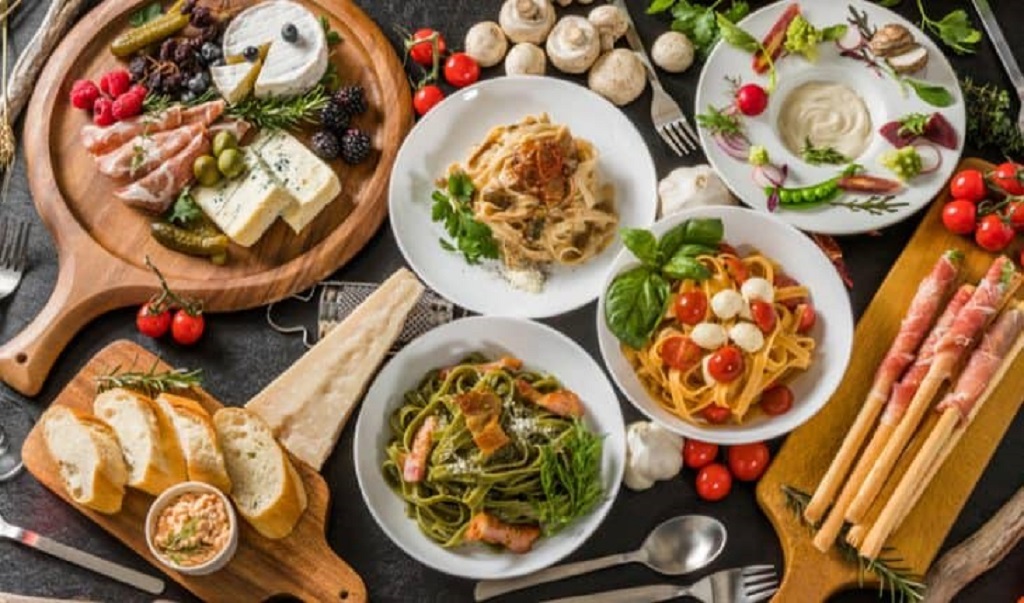 Posted at 07:29h in Food by Lorraine Richardson 0 Comments
0 Likes

Italy has very varied gastronomy that reflects the cultural diversity of its regions and historical experiences. Like the Spanish, its food is included within Mediterranean gastronomy considered one of the most complete and healthy worldwide.

We all know the star dishes of Italian food, such as pizza or pasta, however, it goes much further. In their elaborations, they use abundant vegetables, fruits, meat, fish, rice, pasta, and bread.

Next, we will do a quick review through the different areas of the territory of our neighboring country to discover the typical dishes of Italian food.

The kitchen in northern Italy

Italy borders the Alps to the north. The cold typical of the Alpine region means that its gastronomy is characterized by soups, cooked pasta, and meats boiled in butter and wine. Like their central European neighbors, they use less olive oil, tomato, or dried pasta.

In addition to the risotto , the typical dishes are carpaccio, vitel tonné or vitello tonnato and crochette di patate .

– Carpaccio: these are very very thin slices of raw meat or fish that are macerated in lemon juice, olive oil, or cheese. They are a delicious starter!

– Rissotto: although it is a dish that can be found throughout Italy. In the north of the country, it is truly spectacular. Its base is rice and cheese and from there you can add different ingredients such as pumpkin, spinach or shellfish, and mollusks.

– Pesto and bolognese sauces: they are the two flagships of Italian pasta. These are pine nut and meat sauces, respectively. Like a fun little fact, the best pesto is said to be from the Genoa region of northwestern Italy.

As we get closer to the ‘heel of the boot’, Italian food becomes more like the prototype we all have in mind. These are simpler dishes whose main elements are olive oil, vegetables. And the vegetables that are best grown in each area. The most widely consumed pasta dishes are pizzas, spaghetti, and penne.

– Pizza: as most of us know it is a round-shaped bread dough that is covered with tomato sauce and other ingredients. The original Neapolitan pizza is the Margherita pizza (in honor of the homonymous Italian queen). And its ingredients are tomato, mozzarella, and basil (the colors of the flag!).

– Bruschette: slices of toasted and seasoned bread in different ways. Like other typical dishes, they were born in Naples where it was typical to take them with freshly cut tomatoes and a copious jet of oil. To this day they are taken throughout the south (Campania, Apulia, and Calabria).

– Penne: what in Spain we call macaroni and since we were little we love them. It is pasta made from wheat flour or egg cooked in water. They are cylinders that are covered in different sauces.

– Sauce Carbonara and Amatriciana: both typical of the Lazio region in south-central Italy. Both share bacon and cheese (Parmesan and Pecorino, respectively) as base ingredients. If you go to Rome, take the opportunity to try the authentic pasta alla Carbonara with eggs, cheese, and bacon as it has nothing to do with the sauces of the same name whose base is cream and which are sold in other countries.

Cuisine in Sicily and Sardinia

These Italian islands are some of the largest in the Mediterranean Sea and, although they share many elements with the rest of Italy, they enjoy small peculiarities in their gastronomy.

– Arancini di Riso: these are large croquettes of rice, minced meat, tomato, cheese, peas, and saffron. It is eaten as an appetizer or starter but if you take a couple it is likely that they count as a whole meal since they are quite filling. There are even specialized stores where instead of minced meat they use many other ingredients or even change the rice for pasta.

– Parmigiana: we all know lasagna but this dish is spectacular and not very different. Instead of pasta sheets, fried eggplant sheets are used and a kind of lasagna is made with tomato, mozzarella, basil, and Parmesan. All of that is baked and is exceptionally delicious.

– Siciliani Cannoli: the Italian dessert that we all know is Tiramisu but in Sicily we find cannoli. They are a kind of fried dough cylinders filled with cream based on sheep’s ricotta and sugar. There are those filled with pistachio cream (also very typical of the island). And they are the best option if you want to go out of the strictly typical.

– Malloreddus: is the Sardinian name for gnocchetti. It is a type of semolina pasta that is usually eaten with ragout and salsicce which translates to tomato sauce. Italian sausages, onion, grated Sardinian pecorino cheese, and saffron.

– Astice alla Catalana: in Spanish, lobster “a la Catalana” is typical of Alghero, which due to its proximity is highly influenced by the Spanish region. It is a boiled lobster with tomato, celery. And onion that is served with a sauce made with the lobster head, lemon, olive oil, salt, and pepper.