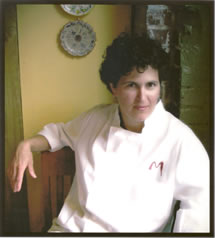 Margot spent many Saturday mornings as a little girl in the kitchen with her mother frying doughnuts, baking bread, and making candy. Cooking was fun and it tasted good, so it was restaurant work she turned to for a part-time job while studying creative writing at the University of Tennessee in Knoxville. Margot excelled in the work and was quickly promoted.

Back in Nashville after graduation, she found herself drawn to the kitchen at Faison’s. Owner Jody Faison encouraged Margot to be creative and introduced her to the work of chefs like Alice Waters. After a year of experience, Margot decided to pursue a career in the culinary arts and enrolled at the Culinary Institute of America. During the two year program, Margot set her sights on NYC and moved there the day after graduation. She held positions in many different restaurants to gain knowledge and experience. In 1992 she became the chef at Danal, a tiny European café in the east village. Margot was exposed to the more rustic dishes of France and Italy. Her developing style attracted a following and garnered reviews in the NY Times and NY Magazine.

After ten years in NY, Margot returned home to Nashville in 1996 and worked as chef de cuisine and then executive chef at F. Scott’s. During her five years there, Margot made a name for herself in Nashville as the restaurant received rave reviews and many accolades.

Margot dreamed of a restaurant of her own, though, and left F. Scott’s in February of 2001. She partnered with Jay Frein to open Margot Café and Bar in June of 2001. Since opening, the restaurant has continued to buzz thanks to incredible neighborhood support and critical praise. Margot Café & Bar has been featured prominently in local publications such as The City Paper, Nashville Lifestyles & The Tennessean and has received numerous Nashville Scene “Best of Nashville” awards including winning “Best Restaurant” five years in a row. National press for the restaurant includes National Geographic Traveler Magazine, Southern Living, USA Today, The Wall Street Journal & The New York Times. McCormack & Frein opened their second restaurant, Marche Artisan Foods, in 2006 to similar acclaim.

Margot’s philosophy on food and cooking is rooted in the cultures of southern France and Italy. She enjoys the sturdy flavors of peasant cookery where cuisine is pure, uncomplicated, seasonally based & ingredient driven. Her cooking style is personal and features food that you can be comfortable with. Margot is not looking to reinvent food but to reintroduce it in a personal & uncomplicated way.

When not working, Margot enjoys travelling, cycling, gardening and spending time with her partner, their son and their dogs in their home in the East Nashville neighborhood of Inglewood.