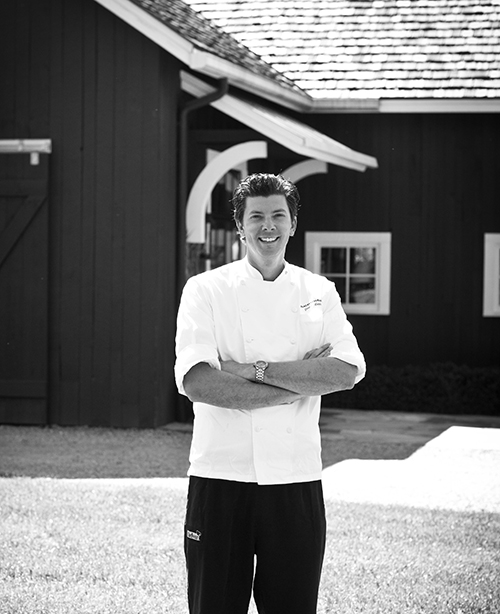 Joseph Lenn, the executive chef of the Barn, leads his team in providing the Foothills Cuisine for which Blackberry Farm has come to be known. A Tennessee native, Lenn is garnering national attention for his talents in the kitchen.

In 2013, Lenn was awarded the prestigious James Beard Award for Best Chef Southeast and was a nominee for the award in 2012. Also in 2012, he was included in the running as one of Food & Wine’s The People’s Choice Best New Chef: Southeast. In 2011, he was honored to receive the title of Grand Chef by the Relais & Chateaux organization, as well as a nod by Food & Wine as one of the top upcoming New Chefs.

Lenn’s team prepares beautifully served multicourse menus, inspired by seasonal, farm-fresh products and produce grown just a few feet away from the Barn in the gardens. A carefully relocated bank barn from the 1800s, the Barn is a visually grand setting in which to relish the earthy delicacies of Blackberry Farm’s bakery, butchery, creamery, and 8,000-square-foot wine cellar.

Inspired by his mother and grandmother from a young age, Lenn sought a career in the culinary world. His training started in the butcher shop at a local independent grocery store in his hometown. Quality ingredients were of the utmost importance there, and Lenn learned that the best food comes from the best product. This thought led him to culinary school at Johnson and Wales in Charleston, SC, where he was able to hone his skills in the kitchen.

During his time in culinary school, Lenn completed an internship at Blackberry Farm and then returned to Charleston to work at the Peninsula Grill with Chef Bob Carter while he finished school. Three years later, Lenn assisted Chef Sean Brock in opening the Hermitage Hotel in Nashville, where he worked for two years honing his creative talent. During this time, his deep love for East Tennessee brought him back to Blackberry Farm, again and again, assisting in cooking schools and special events. “I have always loved the Southeast, and growing up in this region inspires a lot of things that I do,” he says. “At Blackberry Farm, I cook regionally inspired dishes, but more than that, I love the process that I am a part of here. From joining our master gardeners and picking what is sprouting to having fresh ingredients delivered right to the kitchen door, I can’t help but love what I do. Each season brings a new culinary adventure.”

Lenn joined the Blackberry Farm team in 2005 as a sous chef, and in 2007 reopened the Main House Restaurant as chef de cuisine before becoming executive chef of the Barn.