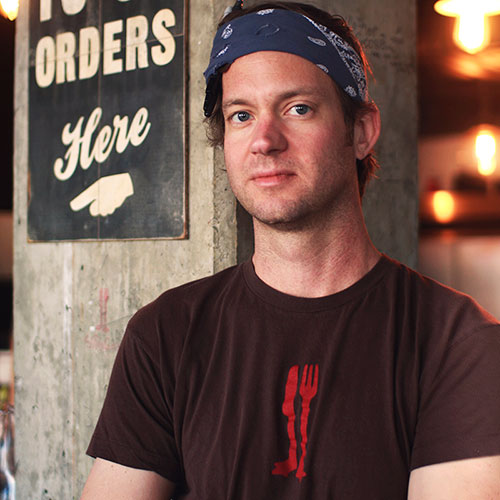 As the Chef and Owner of The Silly Goose in Nashville, Tennessee, Roderick Bailey loves food. But, that hasn’t always been the case. As a child, he was an extremely picky eater – until he experienced New Orleans. When he was seven years old, Roderick’s parents took him to New Orleans, giving him the opportunity to eat at some of the city’s classic culinary institutions: K’ Pauls, Commander’s Palace, Galatoires & Antoine’s. After a few mouthfuls, his relationship with culinary experiences changed forever; Roderick became passionate about food, and he hasn’t looked back since.

At the age of 19, Roderick worked under the direction of Chef Jean Claude Prevot, and in that kitchen, he learned many culinary essentials, ranging from how to hold a knife to classic French technique to prudent resourcefulness. However, the greatest lesson Roderick learned from Jean Claude is one that still marks his culinary ventures today: there are no rules in cooking. He realized that as long as the technique is followed, there is no creative limit. Jean Claude’s nonconformist attitude, resourcefulness, and unorthodox approach to food deeply impacted Roderick and still continue to guide him as a burgeoning chef and restaurant owner.

Roderick went on to attend the Culinary Institute of America in Hyde Park, NY from 1997-1999, with a year at Magnolia’s in Charleston, SC in between. After culinary school, Roderick’s obvious talent helped him obtain his first sous chef job at PJ’s Sea Grille in Boca Grande, Florida at the age of 23, and then went on work as the sous chef at OBA in Portland, Oregon, and the Grove Grill in Memphis, Tennessee. His experience led him to the opportunity of working as a personal chef for a wealthy Memphis-based family, cooking for them both in the South and in their second home in Vail, Colorado. This unique venture allowed Roderick to formulate his own culinary style – achieved through unlimited access to high-quality ingredients with an inexhaustible budget, and complete creative freedom.

After a lengthy amount of time in the culinary world, Roderick opened the Silly Goose in 2009. It had a shotgun kitchen, equipped only with a pair of George Foreman grills, an ice cream maker, a juicer, and a toaster oven. With minimal equipment and only 16 seats, Roderick was not deterred. This was a chance to further develop his style – and with the lack of appliances, innovation was essential. Instead of concentrating on what he was missing, he focused heavily on being resourceful. Roderick chose to extract the menu’s now-trademark bold flavors through the use of herbs, hard spices, and purees. And he relied on fresh, high-quality ingredients, using local purveyors whenever possible, to achieve dishes unbound to a particular culinary region or style, yet characterized by high culinary appreciation. Each dish at Silly Goose embraces a balance of flavor, texture, and aesthetics in unique, yet palatably satisfying ways. The distinct menu was born out of necessity – and embraced wholeheartedly by a community hungry for something different.

In less than one year after opening, the Nashville Scene named Roderick’s 16-seat space “Best New Restaurant” and in two years, he expanded his 16 seats to 48, complete with a full dinner menu and a larger kitchen. In 2013, Food and Wine nominated Roderick as the “People’s Best New Chef Southeast.” Thanks to the tremendous support of his Silly Goose family and community, he won.