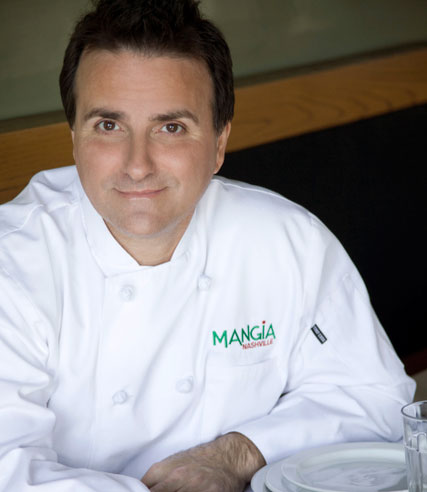 Nick Pellegrino, the creator of the pop-up restaurant phenomenon, Mangia Nashville, brings a level of culinary richness and excitement that is new to Nashville’s dining landscape.

Mangia Nashville’s unique concept quickly garnered the Nashville Scene’s 2011 Writer’s Choice Award for “Best Weekly Food Event” and soon after, Pellegrino has dubbed the “Godfather of Pop-Ups” in Tennessee. He has been a regular guest on WSMV Nashville’s “More At Midday,” as well as the “What’s 4 Dinner” segment during the morning news broadcast. Pellegrino is currently expanding the Mangia Nashville brand with a retail food line, location events, and a television project.

A long time music veteran with a degree in classical guitar, Pellegrino had the idea for Mangia Nashville at a New Year’s Eve party. The inspiration came from his New York City childhood and a desire to relive the boisterous Italian family dinners he grew up with. “My greatest memories as a kid were of my entire family crowded around the table sharing an incredible meal, while telling stories, singing, and joking with each other. My grandmother’s tiny apartment was instantly transformed into the best Italian restaurant on earth.” Pellegrino’s love of food and entertaining was born at that table, which he has now recreated to share with others.

Mangia, Italian for “eat,” is a fixed price, multi-course dining extravaganza that takes place at the Cool Café in Franklin, Tennessee. The chameleon-like eatery transforms itself into a reservation-only, white tablecloth, family-style feast every Friday and Saturday evening. All the bread, gnocchi, sausage, ricotta, dressings, sauces, and desserts are made in house, with the fresh mozzarella completed an hour before it is served. Pellegrino, the emcee of fun, sings, dances, and interacts with guests throughout the three-hour food odyssey.

Pellegrino honed his kitchen skills as co-owner of a successful catering company in his hometown of Staten Island with his close friend, a Culinary Institute of America graduate. He continued to cook professionally to subsidize his early years as a songwriter in Nashville and worked for several upscale caterers including TomKats Catering. As a caterer, he learned to build interesting menus and plan intimate to large-scale events, all while cultivating a one-on-one relationship with his customers.

Italian food icon, Lidia Bastianich, teamed up with Pellegrino for a 2012 fundraising event held at Mangia Nashville. Bastianich praised Pellegrino saying, “I am having a fantastic time. It’s like being with family, it really is. Nick, I think you have an extraordinary concept here. You’re the chef, producer, dancer… You’re multitalented at multitasking. Everything that I love is right here – music, dancing, good food, family, and friends.”

Nick Pellegrino is passionate about changing the way people look at the whole dining experience. “I want Mangia Nashville to be a joyful place where you leave your problems at the door and just celebrate life. You may be seated with strangers when you arrive, but you’re family when you leave…. It’s the ultimate social network.”