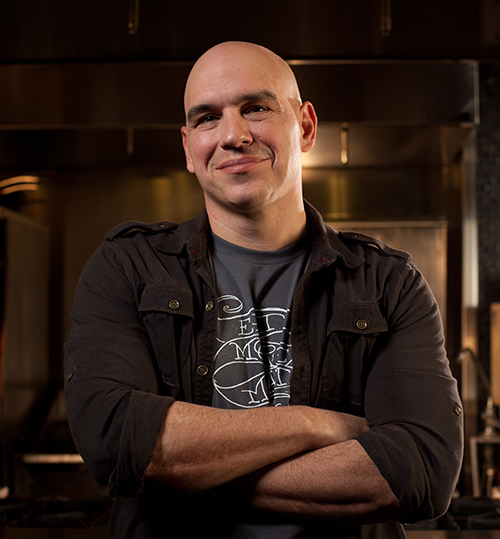 Chef/Owner of Lola, Lolita, Roast and B Spot

Chef Michael Symon cooks with soul. Growing up in a Greek and Sicilian family, the Cleveland native creates boldly flavored, deeply satisfying dishes at his four restaurants in America’s heartland: Lola, Lolita, Roast and B Spot. He also shares his exuberant, approachable cooking style and infectious laugh with viewers as an Iron Chef on the Food Network.

Since being named a Best New Chef by Food & Wine magazine in 1998, Michael and his restaurants have been awarded numerous honors: in 2010, he was the first chef ever to host the annual Farm Aid benefit concert; Bon Appetit magazine included B Spot on their list of “Top 10 Best New Burger Joints;” B Spot’s Fat Doug burger won the People’s Choice award at the SoBe Wine & Food Festival. In 2009, Michael earned The James Beard Foundation Award for Best Chef Great Lakes and the Detroit Free Press named Roast “Restaurant of the Year,” and in 2000 Gourmet magazine chose Lola as one of “America’s Best Restaurants.”

Michael’s most recent television show, Symon’s Suppers, premiered on Cooking Channel in January 2012, and in September 2011, he joined the cast of The Chew on ABC as one of the show’s six hosts. Throughout 2010, Michael appeared on four Food Network/Cooking Channel shows, hosting Food Feuds and Cook Like an Iron Chef, judging season three of The Next Iron Chef and competing on Iron Chef America. Michael won season one of The Next Iron Chef in 2008, earning him a permanent spot on the roster of esteemed Iron Chefs. He made his debut on the network in 1998 with appearances on Sara’s Secrets with Sara Moulton, Ready, Set, Cook and Food Nation with Bobby Flay, before being tapped to host over 100 episodes of The Melting Pot.

While Michael shines on television, he is a genuine hometown guy who made his name cooking in his Midwestern restaurants, all of which became critically acclaimed. Lola opened in 1997 and is now the cornerstone of Cleveland’s dining scene. Lolita, a Mediterranean-style bistro in the historic Tremont neighborhood, opened in 2005. Roast brought Michael’s meat-centric cooking to Detroit’s Westin Book Cadillac in 2008, and two Cleveland locations of B Spot opened in 2009 and one so far in 2011, showcasing his passion for burgers, bratwurst and beer.

Michael published his first cookbook, “Michael Symon’s Live to Cook – Recipes and Techniques to Rock Your Kitchen,” in 2009, sharing home cook-friendly recipes that draw on the flavors of his heritage. Michael’s second cookbook, “Carnivore,” dedicated to meat lovers, was published in October 2012.

When he’s not working, Michael is riding his motorcycle through Cleveland, cooking at home, playing golf, thinking about his next tattoo, gardening in the backyard and spending time with his wife, Liz, and their bullmastiff, Ruby, and Old English bulldog, Ozzy.