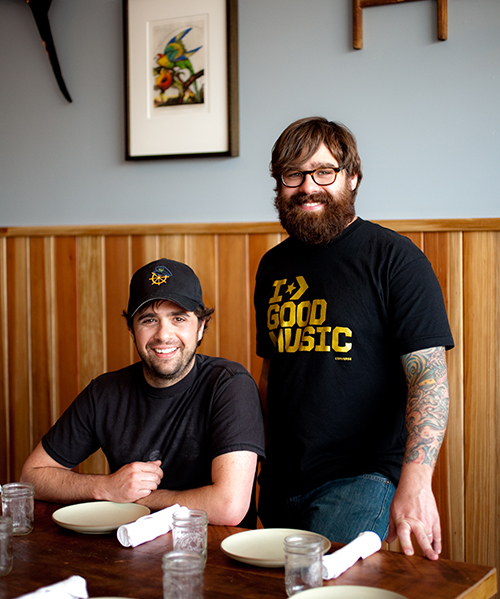 Chefs, Animal & Son of a Gun

Jon Shook and Vinny Dotolo are Los Angeles-based chef-entrepreneurs who blend innovative and seasonal cooking with ambitious dining experiences. They opened an Animal restaurant in June 2008 to widespread acclaim.

Since then the duo has been awarded some of the most prominent national accolades including Food & Wine Best New Chefs, three James Beard nominations, Rising Star Chefs by Star Chefs, Wine List of the Year by GQ Magazine, and one of the Most Important Restaurants in America by Bon Appetit. Their second restaurant, Son of a Gun, opened in February 2011 and was named one of Bon Apetit’s Top 10 New Restaurants for 2012 and Details magazine’s hottest restaurant in the world.

They also operate a full-service catering company, and their cookbook Two Dudes One Pan was voted one of NPR’s “10 Best Cookbooks of 2008.” They have been covered in numerous publications, including, The New York Times, The Los Angeles Times, LA Weekly, The New Yorker, Travel + Leisure, Garden and Gun, Bon Appetit, and Food & Wine magazine, and have appeared on The Morning Show, Last Call with Carson Daly, Iron Chef America, judges on Top Chef, The Layover with Anthony Bourdain, Best Thing I Ever Ate, and NPR’s Good Eats. Just prior to opening Animal the duo starred in their own reality show called Two Dudes Catering on the Food Network. They met while attending culinary school at The Art Institute of Fort Lauderdale in Florida, where they worked for a number of prominent chefs before making their way out west. Most recently they partnered with Ludo Lefebvre to launch his first brick-and-mortar restaurant Trois Mec.