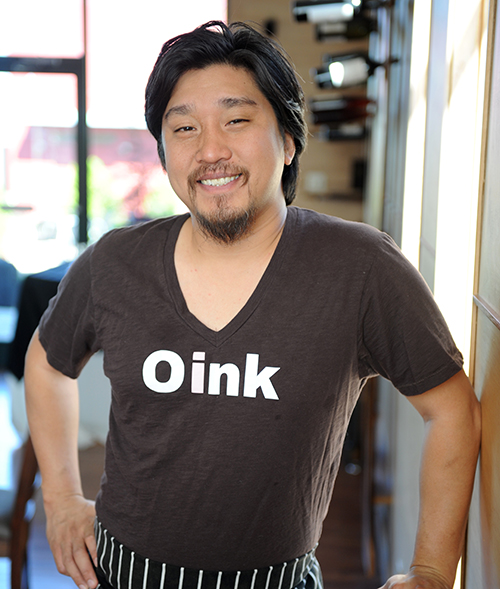 Chef Edward Lee’s culinary story could only happen in America. One part Southern soul, one part Asian spice, and one part New York attitude, Lee is a Korean-American who grew up in Brooklyn, trained in NYC kitchens, and has spent the better part of a decade honing his vision at 610 Magnolia restaurant in Louisville, KY.

Lee’s adventure to Southern-cuisine eminence began in 2001 on a road trip to Louisville during the Kentucky Derby. He discovered a local gem of a restaurant called 610 Magnolia and spent the evenings cooking in the kitchen. Eddie Garber, the chef/owner at the time, was so impressed by his passion and work ethic that he offered Lee the opportunity to buy out his restaurant. Lee accepted the offer within the year, moving his life from NYC to Louisville, and into the dialogue of the blossoming New Southern food scene that would take shape around a handful of young and forward-thinking chefs.

Lee’s culinary style draws inspiration from his Asian heritage, his New York training, and his embrace of the American South, coupled with the best ingredients from local farms. Lee’s innovative cuisine has earned him three finalist nominations for the James Beard Foundation Awards Best Chef: Southeast in 2011, 2012, and 2013. He has been featured in Esquire, Bon Appétit, GQ, Gourmet among many other publications; won on Food Network’s “Iron Chef America,” was a favorite on “Top Chef: Texas, Season 9”; and has appeared on Cooking Channel’s “Foodography,” CBS “Early Show” and NBC “The Today Show.”

Lee’s career extends to writing credits as well, with articles published in Gastronomica, Organic Gardening, Local Palette, and other journals, in addition to authoring a cookbook, Smoke & Pickles (Artisan Books, May 2013) chronicling his unconventional journey from the kitchens of Brooklyn to becoming a lauded Southern chef.

When he is not in his kitchen, Lee spends the rest of his time on his numerous collaborations. His signature blend with Jefferson’s Reserve called Chef’s Collaboration Blend is a luxury small batch bourbon he developed with Master Blender Trey Zoeller. He also consults on product development for both Red Boat Fish Sauce and Bourbon Barrel Foods.

MilkWood is Chef Lee’s newest venture. Located in the basement of the locally revered Actor’s Theater building in downtown Louisville, this new restaurant is Chef Lee’s interpretation of Southern Bar Food with an Asian Pantry. The menu features small plates and smoked meats, all personalized and creative versions of familiar classics.

Lee approaches his professional and culinary life with candor, humor, and—most importantly—the same spirit of adventure that was the original impetus for his success.