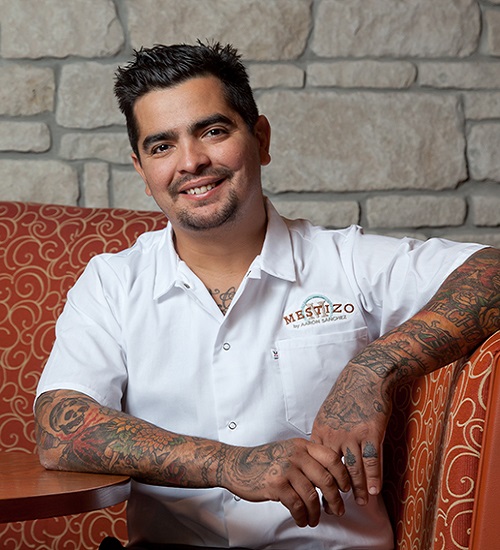 Aarón Sánchez is the co-star of Food Network’s hit series, Chopped, as well as the star of FOX Utilisima’s #1 rated series Aarón Loves NY and their new travel-food series MOTOCHEFS. Aarón is the chef/owner of Mestizo, located in Leawood, Kansas.

He is also the culinary visionary behind Tacombi Taqueria in New York City and Crossroads at House of Blues nationwide. The son of celebrated Mexican cooking authority Zarela Martinez, Aarón’s passion, commitment, and skills have placed him among the country’s leading contemporary Latin chefs.

Sánchez’s cooking “transforms the familiar” (New York Magazine) with his take on Latin favorites. Celebrated by critics and contemporaries alike, Sánchez recently appeared at the White House as a celebrity guest chef and received the “National Award” at the Flavors of Passion Awards, honoring the nation’s best Latin chefs. The bilingual Sánchez was tapped as the spokesperson for Bud Light’s “Amigos y Carne Asada” national grilling campaign for 2012 and 2013.

In addition to being a restaurateur, television personality, consultant, and spokesperson, Sánchez is an author and entrepreneur. His first book, La Comida del Barrio, was published in May 2003. His second book, Simple Food, Big Flavor: Unforgettable Mexican-Inspired Recipes from My Kitchen to Yours, was released in October 2011. Sánchez also designed the first-ever signature chef shoe line for MOZO Shoes.

Sánchez’s creativity extends far beyond the kitchen. He is an admirer of the arts – so much in fact that he has tattooed nearly his entire body with portraits and vivid artwork. Sánchez, an avid music lover, enjoys cooking to the sounds of Alabama Shakes, Amos Lee, Sade, and The Cure and his wife, singer/songwriter IFÉ. Sánchez lives in Brooklyn with his wife and two children.